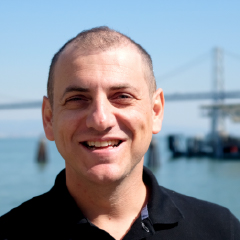 How does Cribl LogStream process data at scale? What does a distributed deployment look like?

In this post we’ll discuss deployment patterns that allow for implementing scale up and scale out architectures. We’ll also look at features that align with best-practices approaches and strategies. Let’s get to it!

The Need for Scale

Most of Cribl LogStream workloads are compute-bound. This means that performance is principally determined by the time spent on CPU operations to be completed. Roughly speaking, the amount of CPU time needed is proportional to (at least) these two factors:

When volume is low and/or the amount of processing is light, a single instance can be sufficient. A faster CPU clock will offer better performance but to sustain even higher data volumes and increased processing you need to scale up or scale out to a distributed deployment.

A single LogsStream instance installation can be configured to scale up and utilize host resources as needed. By default, a single instance starts with two worker processes and can consume up to two CPU cores at full capacity. More worker processes can be configured via Settings > General Settings > Worker Processes. Setting this less than 1 is interpreted as number of CPUs – setting. For example, in a system with 12 CPUs:

This is a great way of setting the number of workers relativeto the CPUs in the system which tends to work very well for hosts with heterogenous resources. 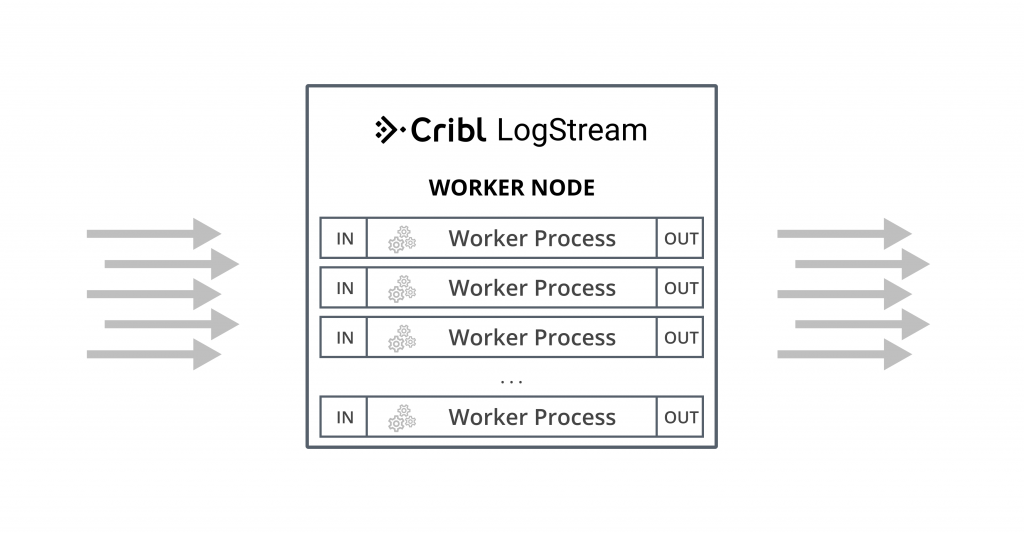 In LogStream worker processes operate in parallel, independently of each other, from input to processing to output. This means that:

When data volume, processing needs or other requirements exceed those that a single instance can deliver, a Cribl LogStream deployment can span multiple hosts or Worker Nodes. This is known as a Distributed Deployment. Such a deployment follows a shared-nothing architecture pattern where instances behave stateless-ly and serve all inputs, outputs and processing of events independent of each other. They are managed by a single Master Node which serves as:

Master and Worker Nodes can be configured using configuration files, CLI or the UI. To configure using the UI follow these steps:

To help with automation – especially in containerized systems -environment variables can also be used. For instance, to configure a Cribl instance asa Worker Node and point it at a Master you can use the following:

A number of environment variables are supported. Documented here.

How do Workers and Master Work Together

The foundation of Master-Worker communication is a heartbeat which Workers periodically send to the Master. The heartbeat not only tells the Master that a Worker is available but it also includes Worker metrics for the period and a set Worker facts such as hostname, IP address, GUID, current software version, current configuration version etc. that the Master tracks with the connection. On every heartbeat:

In addition to default facts, Worker can be configured to pass tags, environment variables and preferred group to the Master. This customization makes Mapping more flexible and predictable. 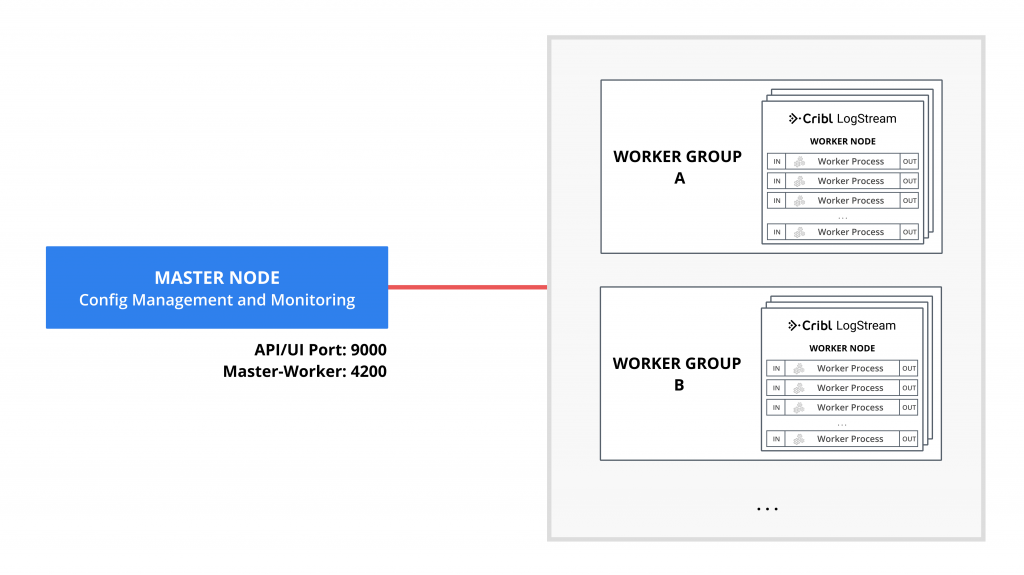 Mapping Rulesets are used to map Workers to Worker Groups. A ruleset is a list of rules that evaluate Filter expressions on the facts that Workers heartbeat to the Master. The ruleset Filter supports full JS expressions (allowing for arbitrary expressability) and similar to Routes are evaluated in a first-match win order.

Example: All hosts that satisfy this condition: IP address starts with 10.10.42 with more than 6 CPUs OR CRIBL_HOME environment variable contains w0, belong to Group420.

To create a Mapping Ruleset, go to Mappings > Add New. Click on the newly created item and start adding rules by clicking on + Add Rule. While working with rules, the Preview on the right pane will show – in real-time – which currently reporting Workers map to which Worker Groups.

Git remotes are also supported in case further integration with other systems is needed.

Typical workflow for deploying configurations is the following:

Authoring of configurations is done as if it were a single Cribl LogStream instance – using the same exact visual interface for Routes, Pipelines, Sources, Destinations and System Settings. This is incredibly easy and superior to a typical configuration-file based approach as the system also does real-time validation of configurations.

In both single instance and Distributed Deployments, LogStream provides operational visibility out of the box. In the distributed case, all Workers forward their metrics to Master which then rolls them up, consolidates them and provides a deployment-wide view. The Monitoring section exposes a number of dashboards with information about traffic in and out of the system. It tracks events and bytes, split by routes, pipelines, inputs, outputs and certain data fields over time. In addition, a number of system metrics are also tracked. Here’s a sample Monitoring screen from one of our lab deployments: 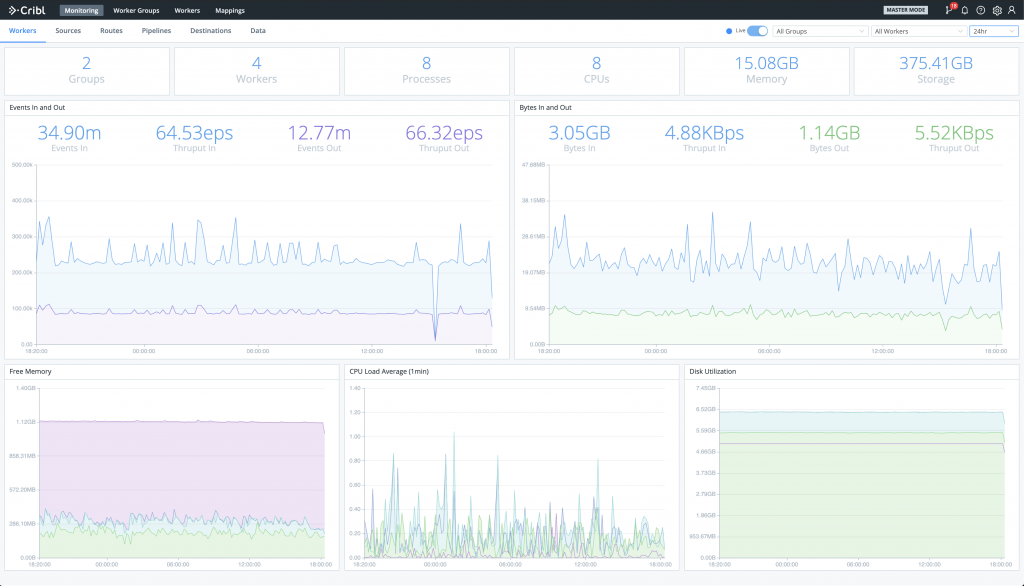 If you’re using another monitoring/observability solution, internal logs and metrics can be forwarded out via Sources > Cribl Internal. This will send cribl.log/metrics down the routes and pipelines just like another data source.

LogStream was built from the ground up to scale. With a shared-nothing architecture it allows for vertical and horizontal scaling – from a laptop to hundreds of Worker Nodes – all with a no-dependencies, single package. The Master node serves as a central management console that provides modern, admin-friendly capabilities such as visual authoring and validation of configurations, integration with git for version control & change auditing and baked-in monitoring of deployment-wide system metrics and health.

If you’re trying to deploy LogStream on your environment or have any questions please join our community Slack– we’d love to help you out.

If you’re looking to join a fast-paced, innovative team drop us a line at hello@cribl.io– we’re hiring! 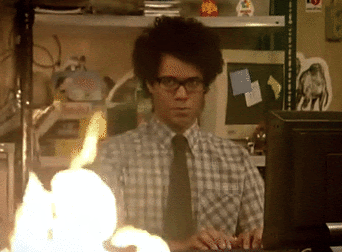 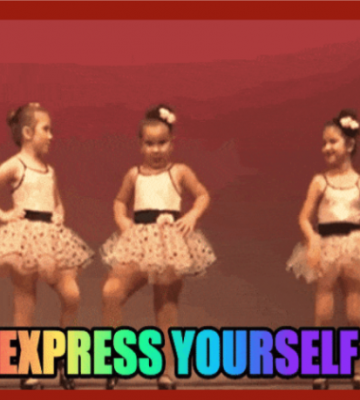